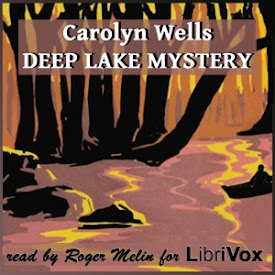 Imagine, if you will, a murder committed in a sealed room. A room which has been sealed from the inside, that is, with no possible means of exit, excepting a dangerous plunge through a window into a deep, foreboding lake with swirling eddies and rocks abound. Add to that image a wreath of flowers around the head and across the chest of the victim, a crucifix, an orange, a feather scarf tucked in here and there, two crackers, a handkerchief, and a feather duster. And a nail. Oh, and one more item to add to the curious array of arranged paraphernalia - a watch in a water pitcher by the bedside. Now place yourself in a position to solve the mystery behind this obvious murder of a wealthy man who was liked by everyone, and had no known enemies.

Carolyn Wells was a well known author of children's stories, until she began reading mystery stories written by Anna Katherine Green, and from then on she devoted her writings to puzzling mysteries in a similar vein. Summary by Roger Melin (8 hr 32 min)

The Girl in the Canoe

The Lady of the Lake

The Watch in the Water Pitcher

As To Tuesday Afternoon

All Right At Last

The summary covers the plot (excellent summary btw). I found myself bouncing back and forth between what I felt were the two obvious conclusions, so the story is tricky but not so much so that you can't guess what the secret is. Overall I found the book enjoyable. I enjoy this reader and have listened to many of his books. Thank you!

Good job, Roger. O.K. plot but predictable. Then it dragged. Why do we have to wait til the end to get one of the first clues, the watch in the water pitcher. We're not all psychs.

A classic for a rainy day read.

Convoluted plot did keep me guessing. Well narrated (Roger Melin) and recommended. Another classic for a rainy day read.

An intriguing novel, written in the language of it's time, was fun to hear aged words used in form and context of a century ago.

More "love" at 1st sight, a girl who at times acts odd, & a locked room. The main character believed to have fallen in love with Alma before even speaking to her. The worst part is that he withheld evidence & constantly kept trying to get others to ignore or misinterpret evidence so that they wouldn't think Alma was involved. Everyone knew he was being a sappy ass but it was still annoying to me. Also, he considered them to be engaged despite her being shocked by his love admission (done during their 1st talk) & despite her not feeling the same. Did women really like this wussy kind of guy? The secret of the murderer (other than who did it) is weird. Why keep that a secret? This all sounds awful but I don't regret listening & didn't figure out the mystery. I liked it but just wanted that guy to go away.

pretty much a story for a teenager

Did not like the interpretation by the reader. It was as if he were telling a story to a child . Love his voice but clearly this did not suit him. The story was very long drawn out and in less than a chapter all was solved and they lived happily after !!!

I really liked the reader's voice and that added a lot to the story. Unfortunately the plot itself was quite drawn out and repetitive. I rarely figure out the killer in any mystery, but this one was obvious pretty close to the beginning. Tightly rendered, this would have been a great short story.

Sad but beautiful story. This reader, as usual, did a wonderful job. His style is so natural that it seems effortless, but I am certain the effort is there as well as the excellence of his narrative. Many thanks from this listener.